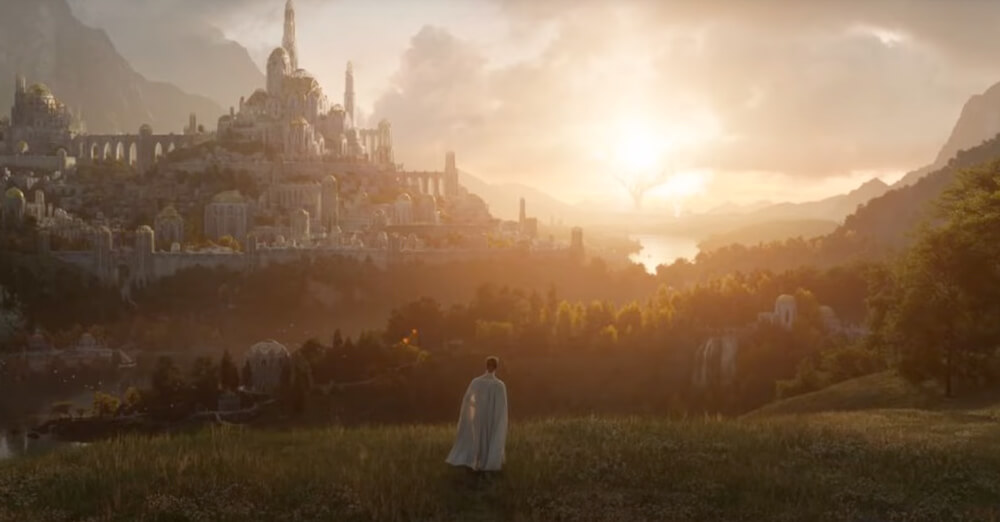 The Lord Of The Rings: The Rings Of Power CREDIT: AMAZON

When T.S. Elliot wrote The Hollow Men he expressed the loss of hope that lay like a pall over his generation: “This is the way the world ends, not with a bang but a whimper.” Europe was in ruins and every family was grieving a loss. For the young of that generation enthusiasm had soured into disillusionment and despair.

J.R.R. Tolkien lived in that same aftermath. He was convinced by his Christian faith that one day there would be a very happy ending. He was realistic about evil and the toll battle takes, but he was also confident that the ultimate ending to the story would be good. We see it most clearly in the final volume of Tolkien’s The Lord of the Rings: The Return of the King.

Tolkien believed the world would end — not with a whimper — but with the bang of a great eucatastrophe, which he described as a “sudden happy turn in a story which pierces you with a joy that brings tears.”

Joseph Loconte writes about an example of it in his excellent book A Hobbit, A Wardrobe, and A Great War:

“In (Tolkien’s) Return of the King Frodo fails in his quest and yet his quest is accomplished not by him but by the most unlikely of creatures: Gollum. Frodo’s defeat — our defeat — is overturned by a Power stronger than our weakness. Tolkien identified this Power as ‘that one ever-present Person who is never absent and never named.’”

Who is this ever-present person who is never named in his main stories who overturns defeat? For Tolkien’s characters, it was understood to be Eru Ilúvatar (Eru for short, or “The One”). You will not see him in the pages of The Hobbit or The Lord of the Rings, nor is he likely to be seen in Amazon’s new The Rings of Power series that debuted last night. But he is always there, working for the good of creation through the lives and actions of hobbits, dwarves, elves, men, and other creatures.

It’s not until you read the The Silmarillion or some of the other notes Christopher Tolkien published after his father’s death that you discover this monotheistic God who created the world and works providentially within it. Tolkien was known to firmly disagree with anyone claiming his books were an allegory for religion or Christianity, yet he did not necessarily view this world with a fictional deity.

Instead Tolkien understood his work to be a sub-creation of the true creator. In this way he revealed in his legendarium that a monotheistic God made and loved his creation — the same God we know in the real world. While everything in Tolkien’s world is fiction, Eru Ilúvatar is the name of the true God in a fictional language and context.

“… Ilúvatar is the Lord for Always who dwells beyond the world; who made it and is not of it nor in it, but loves it.” — Rúmil, The Book of Lost Tales, Part One

This leads to the question of how God acts in these stories. Tolkien coined the word eucatastrophe by affixing the Greek prefix eu, meaning good, to the more clearly understood word catastrophe.

“The eucatastrophic tale is the true form of fairy-tale, and its highest function … It does not deny the existence of dyscatastrophe, of sorrow and failure: the possibility of these is necessary to the joy of deliverance; it denies (in the face of much evidence, if you will) universal final defeat and in so far is evangelium, giving a fleeting glimpse of Joy, Joy beyond the walls of the world, poignant as grief. It is the mark of a good fairy-story … that however wild its events, however fantastic or terrible the adventures, it can give to child or man that hears it, when the “turn” comes, a catch of the breath, a beat and lifting of the heart, near to (or indeed accompanied by) tears.” — J.R.R. Tolkien, On Fairy-Stories

Some clearly identified examples of this happening in The Hobbit and The Lord of the Rings are when Bilbo happens upon the One Ring by chance in Gollum’s cave, when Gandalf is resurrected after his defeat in Moria, and the fall of Gollum into the fires of Mount Doom.

More than a literary device, Tolkien also saw this as something that’s part of our own story, seen most clearly in the gospel:

“The Resurrection [of Christ] was the greatest ‘eucatastrophe’ possible in the greatest Fairy Story – and produces that essential emotion: Christian joy which produces tears because it is qualitatively so like sorrow, because it comes from those places where Joy and Sorrow are at one, reconciled, as selfishness and altruism are lost in Love.” — Letter 89

Whether or not Eru is mentioned in The Rings of Power (he probably won’t be), we can know he is there, behind the scenes, always present and providentially working to conquer evil and bring about redemption. And that’s exactly what we can expect from our Lord in the real world.

Like the quote from Tolkien at the beginning of this article, the Christian story is the story of a great eucatastrophe. The Son of God broke into our world when he was born in that stable, he undid the catastrophe of the fall when he died on the cross, and he will break in again one day in glory.

That’s the way the world ends, not with a whimper but with a triumphant return of the King.

Most of the thoughts above are adapted from broadcasts of Haven Today. As the leader of the Haven Ministries, Charles Morris is always thinking of ways to lead Christians and non-Christians to Christ—hence the familiar slogan, “Telling the great story … it’s all about Jesus.” A former secular journalist, Charles has worked for United Press International, and as a press secretary for two former U.S. senators. He and his wife, Janet, have authored several books, including Missing Jesus. Charles’ latest book is Fleeing ISIS, Finding Jesus: The Real Story of God At Work.

A HOBBIT, A WARDROBE, AND A GREAT WAR

For a generation of men and women, the First World War brought the end of innocence—and the end of faith.