When Storms Die Down 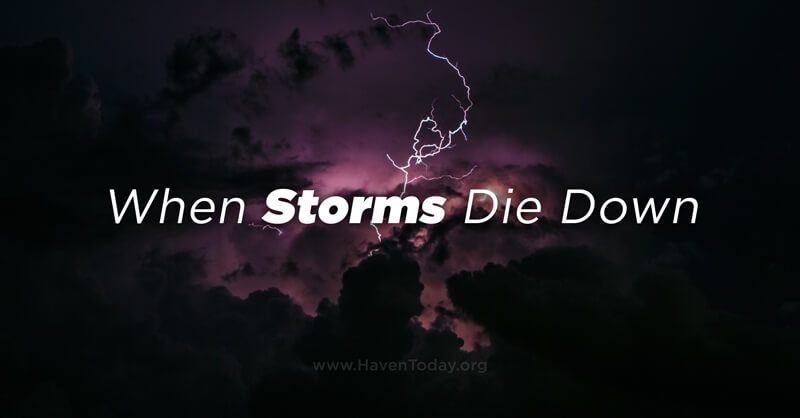 In a short number of days, Hurricane Harvey struck Southeast Texas, Hurricane Irma plowed through the Caribbean before finally slamming into Florida, and an 8.1 magnitude earthquake shook southern Mexico just before Hurricane Katia hit Mexico’s Gulf Coast.
For many of us outside of the paths of these storms and natural disasters, the idea of a relentless force keeping us down is not a new concept. Much like hurricanes and other natural disasters, the storms of life can strike at any moment. They seem to pass eventually, but when we’re in the midst of them, they are beyond our control. That’s why we need Jesus.
Today, the most common symbol of the church is the cross. But did you know it was different for the earliest Christians? The first known Christian symbol wasn’t a cross or even a fish like some of us put on the back of our cars. It was a boat. The symbol of a boat adrift on rough seas was used as early as the third century.
Christians in the early church were having a hard time in Rome when it was still a capital offense to serve Christ. The story of Jesus calming the storm in Mark 4 would have been something they all remembered and cherished when times were tough. And it’s something we can look to today, whether it’s the repeated pounding of hurricanes or any series of unfortunate events.

That day when evening came, he said to his disciples, “Let us go over to the other side.” Leaving the crowd behind, they took him along, just as he was, in the boat. There were also other boats with him. A furious squall came up, and the waves broke over the boat, so that it was nearly swamped. Jesus was in the stern, sleeping on a cushion. The disciples woke him and said to him, “Teacher, don’t you care if we drown?” He got up, rebuked the wind and said to the waves, “Quiet! Be still!” Then the wind died down and it was completely calm. He said to his disciples, “Why are you so afraid? Do you still have no faith?” They were terrified and asked each other, “Who is this? Even the wind and the waves obey him!” (Mark 4:35-41)

We can learn a lot of truth from Mark 4. I’ve used this passage many times in the past on Haven Today, and I’m sure I’ll use it many more times in the future, as well. As I look at it today, there are three critical truths about Jesus from this storm event that I’d like to point out.

1. Jesus is the Savior who doesn’t save us from storms, but through storms. Now, that’s pretty obvious, but it’s often overlooked. Follower of Jesus don’t receive immunity from trouble. In fact, it’s usually just the opposite. The disciples were in the storm and about to drown. This wasn’t because they had gone astray or began living bad lives, they were just following Jesus’ orders. He was the one who told them to get in the boat and cross to the other side.

This is true in our lives, as well. But it’s also true that we’ll never know the glory and power of God without going through failures and storms and tough times. The Apostle Peter later wrote a letter to people going through suffering. Here’s just a little bit of what he said, “Dear friends, do not be surprised at the fiery ordeal that has come on you to test you, as though something strange were happening to you. But rejoice inasmuch as you participate in the sufferings of Christ, so that you may be overjoyed when his glory is revealed.” (1 Peter 4:12-13)

Now I know many of us are going through tough times right now, but that’s God’s way. You might never volunteer to go through it, but, on the other side, you will certainly say it was a time of new growth. And when the storm dies down, you begin to experience the love and power of God in a new way.

2. Jesus is a man. This means that Jesus is human in every way. Mark 4 gives us a picture of this by showing Jesus after a long, hard day, literally teaching thousands of people. Religious authorities opposed him. His own family opposed him (read the verses before this story). And verse 36 says the disciples took him along in the boat “just as he was,” and he was exhausted. He crashed in the back of that boat.

This is the only reference in the entire Bible of Jesus sleeping. And I believe Mark included this scene to offer us comfort. Jesus is our high priest who is able to sympathize with our weaknesses because he himself was weak. The disciples got it wrong—of course, they got it wrong a lot of the time—but they interpreted his sleeping as indifference. Yet in the midst of His fatigue, Jesus showed them just how much he cared by addressing their immediate need.

That’s what the Lord does for you and me, too. Jesus never threw around his power like a magician. He always did it with a redemptive purpose. He loved his children, he loved his disciples, and he loves you and me today.

3. Jesus is God. This is a very interesting point … the meekness as well as the magnificence of Jesus, His humanity as well as His divinity. Jesus spoke and the storm obeyed. In our English translations, Jesus used the words “quiet” and “be still,” but they don’t really get the force of the Greek here. The same words he uses here were used to address demons earlier in Mark. He addressed the demons forcefully. In fact, if you want a very literal translation, he said, “Shut up!”

Jesus could exercise authority with the spiritual world, such with demons, but also over nature itself. Like saying to a storm, “Just shut up!” And there was calm all of a sudden. Yet the disciples were still frightened. In the calm after the storm, they were even more scared. The Greek says that they literally feared a great fear. They were terrified because of the man with them on the boat, which led them to ask, “Who is this? Even the wind and the waves obey him!”

Interesting how they asked the question, but they already knew the answer. Almost certainly, each of the disciples would have known Psalm 107:

Some went out on the sea in ships;
they were merchants on the mighty waters.
They saw the works of the Lord,
his wonderful deeds in the deep.
For he spoke and stirred up a tempest
that lifted high the waves.
They mounted up to the heavens and went down to the depths;
in their peril their courage melted away.
They reeled and staggered like drunkards;
they were at their wits’ end.
Then they cried out to the Lord in their trouble,
and he brought them out of their distress.
He stilled the storm to a whisper;
the waves of the sea were hushed.
They were glad when it grew calm,
and he guided them to their desired haven. (Psalm 107:23-30)

This is a God who is a personal, living God. He intervenes in the lives of his children. He’s with you and He cares for you. He acts with power and compassion. If you’ve trusted your life to his son Jesus Christ, this is the God who cares for you. If the Carpenter hasn’t created that fear and awe in you that he left with his disciples on the boat that day, you’re missing out on an understanding and important dimension of your Savior.

Jesus said to his disciples, “Why don’t you have more faith?” This story shows his weakness—he was tired. But it also shows his strength—perfect love in the security of His Father. The disciples didn’t get it then, and I don’t always get it today, but the truth is still there—Jesus is our God, and our God reigns. We will all have storms coming through our lives at any time. When they hit, they’re beyond our control. But once the storms die down, we remember that it was Jesus who brought us through to the other side.