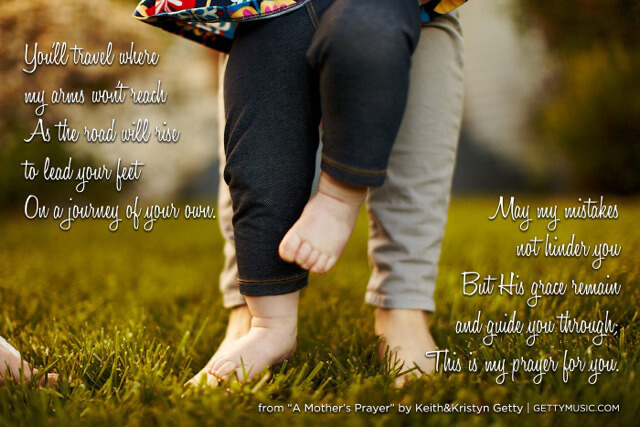 In the spring of 2008 I first prayed for a baby, and in the spring of 2011 God answered that prayer with the birth of our beautiful daughter.  My joy was full but so were the fears I wrestled.  In some ways I felt like a baby Christian again, caught in a whirlwind of emotions, learning and applying what I have known and trusted into a completely new life – I know I’m definitely not the first to feel that!

Friends of ours had given us a card when their first son was born; it was full of prayer requests for his little life, a prayer for every day of the month. My prayers were not quite as coherent as those, especially at first, but the urgency of the moment drove me to my knees.  “Help her, help me” baby prayers at 3am; prayers as I heard the baby monitor light up in the morning; prayers when I thought of her safety, her soul, her future; prayers  with my husband; prayers while Eliza listened in.

When people found out that I was pregnant one of the most frequent comments I received was how my creativity would discover a whole new vista of inspiration as I became a mother.  So, when Eliza came I was anticipating a fresh flow of profound poetic thought, but instead I was swept up in the constant flow of changes and feedings and “Old MacDonald had a farm!” I was expecting full sentences, but I was blubbering looking at my beautiful girl! I actually wondered if I’d ever be able to write again.  I just about tucked some thoughts away to ponder later when my brain would start to fit itself back together again (still nowhere near a completed process!). As I continued to learn the wonderful balancing act and privilege of mothering, homemaking, writing, traveling and singing, Keith and I began to write a song for Eliza choosing this theme of praying for her, and the end result was “A Mother’s Prayer.”

(A Mother’s Prayer is featured on the Getty’s “Hymns For the Christian Life.”)

My parents have faithfully prayed for me my whole life, and I remember when I was younger my mum met with other mums to pray for all their children – a “Moms in Touch” group in Belfast. Even just the knowledge of that helped me, and I want Eliza to know we are praying for her and trying to guide her in this context that reaches to the call and purpose of her whole life and an understanding of the Lord’s grace and faithfulness. We’re now in the toddler stage and some of the prayer needs are shifting.  We wanted the song to reflect the different seasons – ones we had discovered and then those still to come.  We also wrote it to remind us of our promise to pray for her through all the years we’re given.  We hope this song for her – and even more our praying for her – might catch her ear and help guide her heart as she grows up.

Keith and Kristyn Getty, from Belfast, Northern Ireland, have been writing modern hymns for the church for more than a decade.  Their latest album release, Hymns for the Christian Life, features new hymns for congregations and soloists such as “Christ Is Risen, He Is Risen Indeed” and “A Mother’s Prayer” as well as a ten-year anniversary recording of ”In Christ Alone” (written by Keith Getty and Stuart Townend).  When not touring, the Gettys live in Nashville with their daughter, Eliza, where they manage the work of Getty Music.