What did Jesus say about Hell? 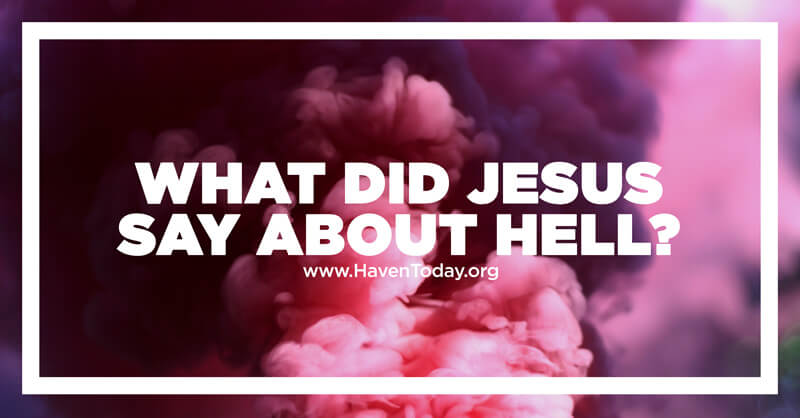 Does believing in heaven and hell affect your well-being? Researchers from Simon Frasier University examined data from surveys taken in 63 countries finding that the more someone believed in heaven, the happier they tended to be. But, the more you believe in Hell, the more likely you are to be unhappy.

However this might affect your well-being, the truth is the Bible clearly teaches that there is a Heaven and a Hell. But even those of us who trust in Jesus for salvation—who believe that He’s gracious and has taken our punishment on Himself—still have questions about Heaven, Hell and the afterlife.

What Jesus Says About Hell

Hell is a troubling subject, so I think it’s best to let Jesus do the talking. In one parable, He spoke of a farmer who planted good seeds in his field, but then an enemy came and scattered bad seeds in that same field. When His disciples asked him to explain what this meant, Jesus said:

“As the weeds are pulled up and burned in the fire, so it will be at the end of the age. The Son of Man will send out his angels, and they will weed out of his kingdom everything that causes sin and all who do evil. They will throw them into the fiery furnace, where there will be weeping and gnashing of teeth. Then the righteous will shine like the sun in the kingdom of their Father. He who has ears, let him hear.”  Matthew 13:40-43

Jesus told another parable about a king who prepared a wedding feast for his son (it’s pretty clear that this son was Jesus and that the Father was God). A select few were invited but they refused. So then the father opened the invitation up to everyone. At the wedding feast someone was discovered who didn’t have on wedding clothes. This is what happened:

“The king told the attendants, ‘Tie him hand and foot, and throw him outside, into the darkness, where there will be weeping and gnashing of teeth.’”  Matthew 22:13

Jesus makes the same point over and over again in different ways. The King will come. It will be a great day of reckoning. Those who believe in Him and know Him and obey Him will be welcomed into His kingdom with great joy. But those who’ve rejected God or said they believed in Him when they really didn’t—they’ll be turned away.

I don’t think there are any more terrifying words in the Bible than Jesus’ words, “Depart from me, I never knew you.” Jesus speaks about separating the sheep from the goats in another parable. The sheep will be welcomed into the kingdom but the goats meet a different fate:

“Then he will say to those on his left, ‘Depart from me, you who are cursed, into the eternal fire prepared for the devil and his angels.’”  Matthew 25:41

Why Jesus Talks About Hell

Jesus talks about Hell because He wants us to understand the full significance of what He did for us on the cross so that we’ll run to Him and take refuge from the wrath to come. On the cross, Jesus took on the punishment for our sins and suffered our judgment. The good news is that we can receive the benefit of this magnificent sacrifice for free … simply by believing in Him.

When we put our faith in Jesus, our sins are forgiven and we are declared righteous in the sight of God, no matter who we are or what we’ve done to deserve punishment. Instead of being enemies of God, we become his friends, His sons and daughters, and the heirs of His kingdom.

The cross is the breathtaking good news of the gospel that isn’t really that good unless we grasp the fact that Hell is for real. Yes, this may be unsettling for a time, but there’s a reason we can’t ignore the truth that Hell is a real place.

Jesus keeps bringing it up in parables, because He wants to deliver us from a false sense of security. Whether you like it or not, we all are affected by the original lie that Satan told our first ancestors. He said, “You will not surely die,” even though God had warned Adam and Eve that if they disobeyed Him they would surely die.

In the same way, Satan wants to eliminate any worries we might have about Hell. He wants us to be lulled into complacency. People who think life ends at death are just engaging in wishful thinking. Jesus gives us these vivid parables to counter that original lie. There WILL be a judgment; there IS a terrible eternal consequence for our sin. When that fact finally sinks in, it wakes us up so that we can turn to Jesus, put our faith in Him, and be saved.

“God demonstrates his own love for us in this: While we were still sinners, Christ died for us. Since we have now been justified by his blood, how much more shall we be saved from God’s wrath through him!”  Romans 5:8-9

Don’t stop here. Now that you’ve read about what Jesus said about Hell, it’s only natural to look into what the Bible says about Heaven. I think Randy Alcorn wrote one of the best books on the subject, so if you’re looking to learn more about what the Bible says and doesn’t say about our future hope, I want to recommend you get a copy today. It’s called Heaven and it pulls together all that the Bible teaches about God’s kingdom, sharing it in a way that’s both enlightening and easy to read. You can find more details below.

We all have questions about what Heaven will be like, and after twenty-five years of extensive research, Dr. Randy Alcorn has the answers. In the most comprehensive and definitive book on Heaven to date, Randy invites you to picture Heaven the way Scripture describes it-a bright, vibrant, and physical New Earth, free from sin, suffering, and death, and brimming with Christ’s presence, wondrous natural beauty, and the richness of human culture as God intended it. God has put eternity in our hearts. Now, Randy Alcorn brings eternity to light in a way that will surprise you, spark your imagination, and change how you live today.