The Meaning of Work 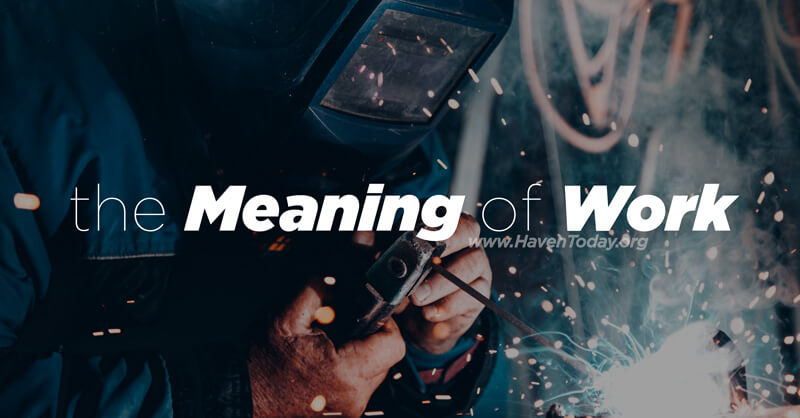 In the last several years, we’ve seen record levels of unemployment. It even had a name: The Great Recession. Today, unemployment rates are much better, but most of us remember the recession well enough to know that just having a job is a gift. On the first Monday in September, many Americans will even celebrate Labor Day in honor of working people.

But what about those of us who have difficult jobs and difficult bosses?

This may seem like a loaded question, but the answer is simple. We can offer our work—whatever it is we do—to the Lord. Paul reminds us of this throughout the New Testament:

1 Corinthians 10:31
“So whether you eat or drink or whatever you do, do it all for the glory of God”

Colossians 3:17
“Whatever you do, whether in word or deed, do it all in the name of the Lord Jesus, giving thanks to God the Father through him.”

Colossians 3:23
“Whatever you do, do your work with all your heart, as working for the Lord, not for men.”

It’s a beautiful idea. But how does it work?

What the Bible Says About Work

Picture the temple in Israel, think of the perfection that was required before an animal could be sacrificed. Ritual purity was required of the priests before they could offer a sacrifice. Think of how all the bowls and basins that contained the sacrifices had to be ritually cleansed before they were holy.

That same holiness that was so hard to achieve in the Old Testament can now be applied to your job. Let me explain.

The Lord promised to create a new world where everything was going to be holy to the Lord. In Zechariah 14, he describes that new world and says that “holy to the Lord” is going to be inscribed on the bells of the horses. And the cooking pots that every day people cook with, he says, will be like the sacred bowls in front of the altar. Because the whole world will be a temple and everything in it will be holy and everything the people of the Lord do as work will be a holy offering to the Lord.

So when is God going to create that new world? He already has.

He did it through the death and resurrection of his Son. Jesus took all the unholiness of God’s people down into the grave. He shed his blood so we could all be sprinkled like the priests were sprinkled, so we could all be made permanently and completely holy to the Lord. And He’s raised us up to a new life where our everyday activities have all the beauty of a holy act—even our pots and pans are holy.

It’s true that the world Zechariah was talking about is still in the future. We’re still waiting for the new heavens and the new earth. It hasn’t come into its full reality yet. But like everything Jesus accomplished, the future is already happening. We’re already living out this future reality.

Our everyday work is holy to the Lord right now. Whether you are a doctor, a teacher, or a restaurant worker, we can all offer our work to the Lord as a holy thing. And that changes our lives. It changes our jobs. It gives meaning to whatever we do. It turns the simplest things into sacred acts of worship.

For a while the church lost this concept. It started happening way back in the history of the church. Slowly but surely the division between holy work and ordinary work crept back in until once again there was a sharp distinction in people’s minds between the holy life of a monk or nun and the plain life of ordinary believers.

And then came Martin Luther.

How Martin Luther Changed the Way We Work

Martin Luther was a monk before he started what became known as the Protestant Reformation. Not only did he rediscover the beautiful truth of the gospel that salvation is not by works but by grace, but he also rediscovered the truth that the everyday work of every believer is holy to the Lord.

Luther had been taught that the celibate, cloistered life of a monk was the only truly holy life he could pursue, but when he discovered the gospel, he realized this wasn’t accurate. Every believer is a priest. And all work is holy to the Lord.

So he left the monastery and he started writing. He wrote that the lives of a believing mothers, fathers, shoemakers, and farmers are all holy to God. He wrote that Christians are called to live out their holiness in the everyday world, doing everyday things by faith for the glory of God. He even wrote that when a father changes a diaper, God and all the angels rejoice!

This was radical thinking at the time … but it was also biblical.

Luther wrote that the duties of parents—rocking babies, washing diapers, laboring at a trade to care for a family—may seem un-glamorous, but they are actually “adorned with divine approval as with the costliest gold and jewels … These are truly golden and noble works.”

He ended up marrying a former nun, and their life together set a new standard for the believers of their day that became a model of the simple but holy life of ordinary Christians.

Martin worked as a pastor and a teacher most of the time, but Katerina, his wife, the former nun, was engaged in everyday work, the kind of work everyday people did every day. She worked hard and she loved it because she knew she was working for the Lord, that she could offer whatever she did to Him.

In doing this, she transformed the old moldy former cloister where they lived into a comfortable home.

She also launched all kinds of enterprises to feed her household. She kept cows for milk and butter and cheese. She even started a piggery because Martin liked pork. After that, he occasionally referred to her as “My Lord Kate, Mistress of the Pigsty.”

In addition to all of this, she turned a neglected field into a productive garden, planted an orchard, stocked a pond with fish, and ministered to the needs of people all over town.

Not all of this was glamorous, but it was holy work! And it’s the same for you and me.

Whatever you do, your everyday work is holy work when you do it through the Lord and for the Lord. Whether or not you have a bad boss or work a job you don’t like, I think there’s a simple and very profound word of wisdom from the apostle Paul that can help us all find purpose in even the worst working conditions:

Colossians 3:23-24
“Whatever you do, work at it with all your heart, as working for the Lord, not for men, since you know that you will receive an inheritance from the Lord as a reward. It is the Lord Christ you are serving.”