Hurricane Harvey: How You Can Help 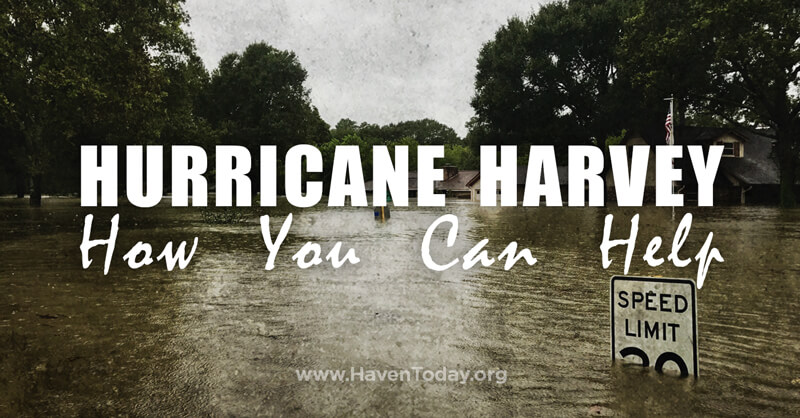 What started out as a Category 4 hurricane has now become the biggest rainstorm in the history of the continental U.S. Homes are flooded, people are trapped, and local authorities are inundated with too many calls for rescue.

To put it simply, Hurricane Harvey victims need our help. Which is why we’re partnering with Samaritan’s Purse in bringing relief to those who need it most. Will you give today to help the victims affected by Harvey?
We are broadcasting from Southeast Texas today, describing firsthand the devastation from Harvey and hearing the stories from the people affected. The effect of the tropical storm remains, even as the rainfall moves on and dissipates to the northeast.
Bonnie BeMent, afternoon host and assistant general manager of our Houston station—KHCB, is one of those people trapped in her home as flood waters rage through her streets and around her house. She finds comfort in in this Psalm:

And as so many rest in the shadow of the Lord’s wings in the midst of this storm, the cavalry is arriving. Help is coming from all around the country as truckloads of supplies and volunteers show up to bring relief.
But supplies are limited, and they need your help.
So I want to invite you to do two things … First, pray for the Lord’s hand of mercy today and in the days to come as we begin to figure out what happens next once the rains finally stop. Second, please join us in directly helping the victims of this record-breaking storm by giving to the relief effort today.

** Remember, 100% of your gift will go toward bringing relief to those affected by Harvey. So when you make your gift, just let us know how much you want to give for relief and how much you’d like to give to this listener-supported ministry.