Christmas Through the Eyes of Isaiah 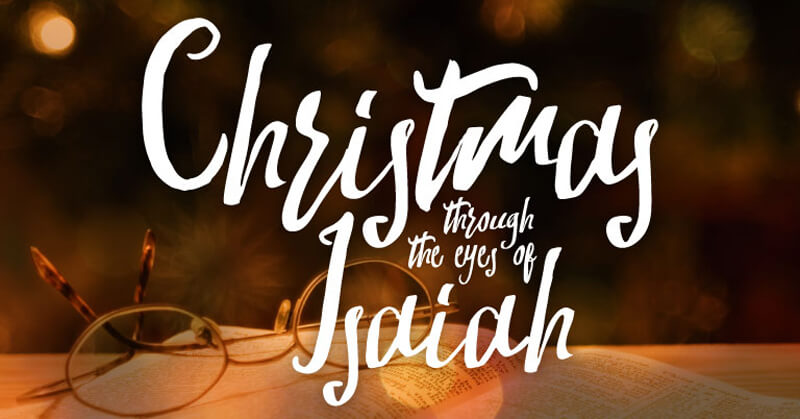 Where I’m from, people seem to be filled with joy at Christmastime. It’s a time when Christmas music, both secular and Christian, take over the airwaves to spread the spirit of Christmas cheer. But is that the way the Lord wants us to celebrate His birth? Is it all about bright lights, happy moments, and joyful memories?

I think that Christmas should be all of these things, but I also think the true essence of Christmas goes a bit deeper. As Christians, we must acknowledge that there is something wrong with our world before we can celebrate the birth of the One who was sent to save it.

Isn’t that why Jesus came in the first place?

To uncover this answer, I’m not going to take us through the four gospels—our journey begins long before Mathew, Mark, Luke and John recorded the life and ministry of Jesus. We need to see Christmas through the eyes of the prophet Isaiah.

The Days of Isaiah

About 700 years before Christ, Isaiah lived during a time when an evil world power was beginning to spread its dark and destructive influence over the land. Assyria was conquering nation after nation, and tiny little Israel and Judah didn’t seem to stand a chance.

The problem in Isaiah’s day was that even as darkness swept in and the armies of Assyria came marching toward them, God’s people turned their backs on the Lord. Isaiah promised that God would save them, but the people, and especially the king, didn’t think they needed Him. Instead, they thought they could make alliances and treaties and compromises. They trusted in man, not God.

Isaiah was a prophet who had to tell God’s people about danger. He wanted the people of God to reach out and hold the Lord’s hand and not to trust in other nations or other people … but they didn’t listen. And so they would be led away into exile.

Thankfully, that’s not the end of the story.

From that exile, God would bring about a new salvation, a new exodus and a life-changing comfort through relationship with him.

For to us a child is born,
to us a son is given,
and the government will be on his shoulders.
And he will be called
Wonderful Counselor, Mighty God,
Everlasting Father, Prince of Peace.
Of the greatness of his government and peace
there will be no end.
He will reign on David’s throne
and over his kingdom,
establishing and upholding it
with justice and righteousness
from that time on and forever.
The zeal of the Lord Almighty
will accomplish this.

The Messiah is a Branch

Throughout the Old Testament, prophets frequently speak about an image of the coming branch, which may seem a little strange. Why were Old Testament prophets so excited about a branch, and not simply concerned with the whole tree? The image comes from a story.

Psalm 80 captures this story well as it speaks of the Lord bringing Israel (the vine) out of Egypt in Exodus.

You transplanted a vine from Egypt;
you drove out the nations and planted it.
You cleared the ground for it,
and it took root and filled the land.
The mountains were covered with its shade,
the mighty cedars with its branches.
Its branches reached as far as the Sea,
its shoots as far as the River.

When the Lord brought his people out of Egypt, they had nothing. The Bible describes them as a tender, small shoot or as a young little vine for which God would clear out a place for in the world.

Like a loving gardener, the Lord carefully planted and tended this little vine. This plant then grew and turned into a great vineyard, but then the people of God forgot the Lord as their savior. They turned away from Him, so He allowed other nations surrounding them to break down the walls protecting his vineyard, walls that he had built. And the entire vineyard is chopped down.

So, now, we come back to the question. Why were the prophets so excited to predict just a branch instead of looking at the whole tree? Simply, there was nothing left of God’s vineyard. There was no tree. There was only a stump. And so a branch coming out of a stump is a beautiful picture of restoration, of a Messiah coming to those who had been cut down and exiled.

Now, that’s good news. That’s a message of true joy for all of the world.

The Messiah is a Servant

If we are to celebrate Christmas through the eyes of Isaiah, we need to consider the whole picture. It’s not just about a baby in a manger, but about what the Christ child had come to earth to do.

We might want to ask, what was the purpose of Christmas in Isaiah’s mind? Where was Christmas supposed to go? And with both of these questions in mind, I can introduce the second portion of Isaiah, a section that is known as the servant songs.

Who has believed our message
and to whom has the arm of the Lord been revealed?
He grew up before him like a tender shoot,
and like a root out of dry ground.
He had no beauty or majesty to attract us to him,
nothing in his appearance that we should desire him.
He was despised and rejected by mankind,
a man of suffering, and familiar with pain.
Like one from whom people hide their faces
he was despised, and we held him in low esteem.

Surely he took up our pain
and bore our suffering,
yet we considered him punished by God,
stricken by him, and afflicted.
But he was pierced for our transgressions,
he was crushed for our iniquities;
the punishment that brought us peace was on him,
and by his wounds we are healed.
We all, like sheep, have gone astray,
each of us has turned to our own way;
and the Lord has laid on him
the iniquity of us all.

In this passage, there are three surprising good news announcements regarding Jesus that require special consideration.

First, the servant of the Lord will suffer. It might seem strange to say His suffering is an announcement of good news, but it is. Kings and political leaders aren’t expected to silently suffer and die. Leaders of armies eat the richest of foods, sleep in the nicest of quarters. They receive all the privileges of their stations.

But this suffering servant—this future Messiah—is different. According to verse four, He takes up pain and bears suffering. He is punished by God, stricken and afflicted. Verse five says he was pierced and crushed, that He was punished and wounded. Why? The second good news announcement answers that.

Second, the Servant of the Lord Suffers for us. That’s why the coming Messiah endures all this pain. “Surely he took up our pain and bore our suffering” Why was he pierced, crushed and wounded? “He was pierced for our transgressions, he was crushed for our iniquities; the punishment that brought us peace was on him, by his wounds we are healed.”

Do you hear the pattern? Him for us. So much suffering and pain, but it’s all for a reason. And that brings us to the third good news announcement.

Third, the suffering of the servant wins us peace. No suffering is ever meaningless, even when it feels like it has no purpose. Jesus’ suffering was especially purposeful because He brought us peace. He healed us. And that’s good news for a world with little peace and healing this Christmas.

The Christ of Christmas

Now, as this massive prophetic book of Isaiah starts to make it’s way to a conclusion. We hear so many words of hope. And we even hear words of restoration.

“Sing, barren woman,
you who never bore a child;
burst into song, shout for joy,
you who were never in labor;
because more are the children of the desolate woman
than of her who has a husband,”
says the Lord.
“Enlarge the place of your tent,
stretch your tent curtains wide,
do not hold back;
lengthen your cords,
strengthen your stakes.
For you will spread out to the right and to the left;
your descendants will dispossess nations
and settle in their desolate cities.

“Do not be afraid; you will not be put to shame.
Do not fear disgrace; you will not be humiliated.
You will forget the shame of your youth
and remember no more the reproach of your widowhood.
For your Maker is your husband—
the Lord Almighty is his name—
the Holy One of Israel is your Redeemer;
he is called the God of all the earth.
The Lord will call you back
as if you were a wife deserted and distressed in spirit—
a wife who married young,
only to be rejected,” says your God.

Think back with me to the beginning of Jesus’ life. We’ve heard through the prophetic eyes of Isaiah the birth of Jesus and the announcement that John the Baptist would use to begin the Messiah’s ministry. We even looked at Jesus’ suffering and death and how that brings us peace. But come back with me biw to the birth of Jesus.

Where was he born? A manger.

To whom was he born? A scared young woman who had never been married.

What do these details tell us about the way God works? He chooses the humble things and humble people to proclaim his glory. Jesus is born in a low position so that all the glory can resound back to God.

As we reflect on Christ this Christmas, we can only stand in awe that the eternal God became man and loved his creation and his people enough to take up a body and be born to a humble girl named Mary. Born in a manger in a stable because there wasn’t any room for them in a Bethlehem Inn.

This is the Son of God. This is the Almighty we worship. This is the Christ of Christmas through the eyes of the prophet Isaiah. Hallelujah, what a Savior.