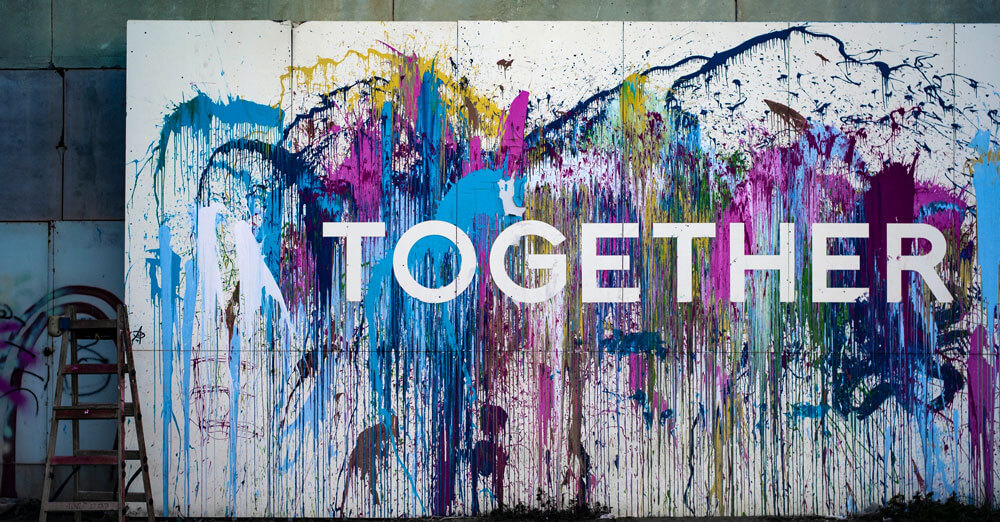 “Let’s open up now.” “No, we need to stay closed down a little while longer.” The debates are endless. Even Christians are at odds with one another, divided by issues surrounding the coronavirus pandemic.

I’ve seen some Christians on social media say, “If you’re afraid, just stay inside. Don’t infringe on my rights.” While others are calling for us to remember Romans 13 and to obey our local authorities. So many debates. So much information. Nothing seems clear.

Christians debating Christians is nothing new, but it’s also something the Apostle Paul reproached on a regular basis. If you’re a believer in Jesus today, one thing should remain clear … you are united to something and someone far greater than the pandemic and it’s debate.

Because of the Holy Spirit, you are a vital member of Christ’s body. Just as you are united to him, you are also united to every other Christian in the world. My friend J.I. Packer explained the importance of Christian Unity well when he said, “Christian unity should be taken seriously because God takes it seriously.”

The Call for Christian Unity

In a recent segment on 60 Minutes, a report on automakers featured an interview with GM employee Tracy Streeter. He now spends each of his days maneuvering a tiny screw into countless ventilators. It’s just one of 400 parts that make up the full machine. Tracy said, “Even though that screw is so small, it’s an important part. I look at it in the scheme of things. I’m just probably just as insignificant as that small little screw. But I play a part in what’s happening in the bigger scale.”

The picture Tracy paints here is not too far from another that we find in Scripture. The body of Christ is also something made up of lots of individual parts. If you’re a believer in Jesus today, you’re playing a part in “what’s happening on a bigger scale.” Because of the Holy Spirit, you are one with every other believer. A vital member of Christ’s body. United to him, and united to each other.

In the fourth chapter of Ephesians, Paul urges all Christians to be humble, gentle, patient, and to bear with one another in love. That’s quite a call to Christian unity, especially in light of today’s troubles.

“As a prisoner for the Lord, then, I urge you to live a life worthy of the calling you have received. Be completely humble and gentle; be patient, bearing with one another in love. Make every effort to keep the unity of the Spirit through the bond of peace. There is one body and one Spirit, just as you were called to one hope when you were called; one Lord, one faith, one baptism; one God and Father of all, who is over all and through all and in all. But to each one of us grace has been given as Christ apportioned it.”
–Ephesians 4:1-7 (emphasis added)

The first verse here tells us that Christians have a calling upon their lives. That calling is explained clearly now in verse 3: “Make every effort to keep the unity of the Spirit through the bond of peace.” Doesn’t that sound wonderful? Who doesn’t want the unity of the Spirit among us as believers? But we so often choose another way. Especially during times of high tension, we can be tempted to view our brothers and sisters in Christ suspiciously. But that’s not what Scripture calls us to do.

If we have such a hard time keeping this unity, how do we begin to turn things around? Wouldn’t it be great if there were a step-by-step process? Thankfully, one such process is laid out for us so helpfully right here in verses 2-3.

Step 1: Paul says “Be completely humble.” Humility means putting others’ needs above your own. Humility doesn’t mean being unkind to ourselves. But it does require us to realize that we aren’t better than anyone. We’re all human. And we’re all sinners.

Step 2: Be gentle. Can you be gentle without first being humble? Gentleness flows from those who realize how completely dependent they are on God. When we realize how gentle God has been with us who have sinned against him, we can begin to be gentle with other Christians. Even those we have big disagreements with.

Step 3: Be patient. Being patient means, as James tells us, being quick to listen, slow to speak, and slow to get angry. Once these virtues are in place, then we can move on to …

Step 4: Be forbearing. We don’t like to hear it, but believers are called to put up with one another. The world dismisses those who are annoying or too opinionated. But in the Church, we bear with one another in love. Christ said, “You shall love your neighbor as yourself.” There’s no exception clause there.

Four simple steps to keeping the unity of the Spirit. On our own, it’s impossible to achieve these four steps on a regular basis. Only when we accept that Christ has done these things for us will we begin to live them out ourselves.

CHRIST’S HUMILITY
Who has humbled himself more than Jesus? Has anyone of such high status ever gone so low? He is the eternal Son of God. But he came down from heaven and humbled himself even to death on a cross for our sakes.

CHRIST’S GENTLENESS
Has anyone ever displayed such gentleness? Jesus says, “I am gentle and lowly in heart, and I will give you rest for your souls.” The world has never known one gentler.

CHRIST’S PATIENCE
Has anyone ever been more patient than Jesus? He allowed wicked men to mock him, beat him, and crucify him. All the while, he asked God to forgive them.

CHRIST’S FOREBEARANCE
And can we find anyone who better fits the description “bear with one another in love.” So great is his love for us that he bore not just our annoying habits and not just our strong opinions. Jesus bore our sins.

The Church has a once-in-a-lifetime opportunity to shine the light of Christ all the more in the darkness of this world. Government leaders might fight about the best way to handle this crisis, but the world should see that Christian unity is based on something more powerful.

Be humble. Be gentle. Be patient. Be forbearing. But also remember that Christ was all these things for you first. It is all of grace. Receive him again today by faith. Only then will we keep the unity of the Spirit.

This blog was adapted from Part Three of the Haven Today series United We Stand.