“… nor will he harbor his anger forever.”

Psalm 103:9b
Have you ever been cut off in traffic? Received an unduly cross word from someone? Been lied to or cheated? Maybe you’ve been wronged in a much deeper way by a friend or a loved one. Situations like these often stir up feelings of anger within us. Sometimes we may even want revenge.
Thankfully, God’s anger is not like ours. It is holy and just, never spiteful. God will never “fly off the handle” because of His short temper, nor will He stop listening to your prayers because of a personal grudge stewing within Him. God’s righteous anger directed toward sin will be revealed at the final judgment. But this will not be the first time He has shown His anger.
At Calvary, all of God’s anger and wrath towards the sin of His people was poured out upon Jesus Christ. On that day, there was weeping. But just as the weeping of the disciples turned into joy when Christ resurrected, so the cross should bring joy to us. Because of Jesus, God’s anger does not abide on any who have faith in Christ, not even for a moment. [Jared, Orlando, FL; second year student] 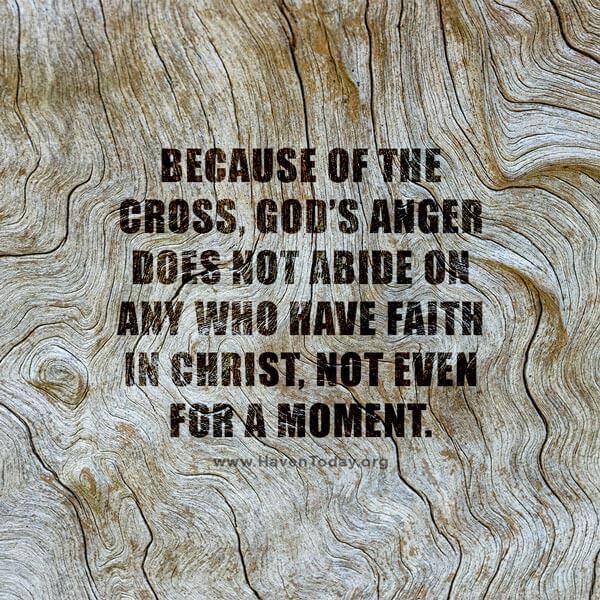 “Because the sinless Savior died,/ my sinful soul is counted free;/ for God, the just, is satisfied,/ to look on him and pardon me.” (Charitie L. Bancroft, 1863