“As they talked and discussed these things with each other, Jesus himself came up and walked along with them; but they were kept from recognizing him.”

Try to put yourself in the setting of the two friends on the road from Jerusalem to Emmaus. It’s the day after Jesus’ body was found to be missing from the tomb. Naturally, they are discussing everything that has happened. On this seven-mile journey, they encounter a “stranger” who joins them and involves himself in their conversation. Astonished at his lack of knowledge, they recount the events of the past three days. The tomb was found empty, and their hope for the redemption of Israel—Jesus—has not been seen alive. They are devastated.

There probably have been times that your hopes have been dashed. Something you believed in with your whole heart turned out to be false. Something you planned on confidently went the opposite direction instead. The two Emmaus road friends knew this agony and letdown.

We may wonder how it could be that they didn’t recognize Jesus. Sometimes we do the same. But at the table of Holy Communion, our eyes are opened to the reality of who He is. In the breaking of bread, He comes to us. 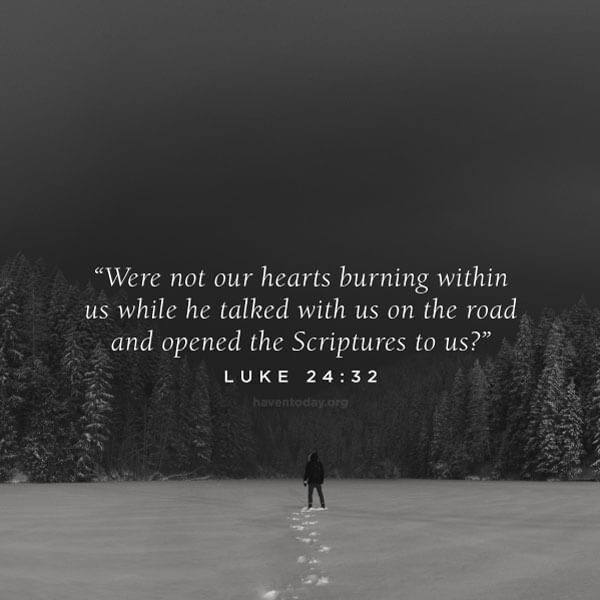 “Were not our hearts burning within us while he talked with us on the road and opened the Scriptures to us?” (Luke 24:32)