“Do not cast me from your presence or take your Holy Spirit from me. Restore to me the joy of your salvation and grant me a willing spirit, to sustain me.”

Psalm 51:11-12
I do love antiques, though I’m not much of a collector or expert in them. Most of our antiques were acquired as cast-offs, not valuable treasures from pricey shops. That means restoration was necessary to make them serviceable. I think that’s what I love most—taking what someone else considered worthless and restoring its purpose and luster.
David was God’s man—a man after God’s own heart. But his heart had wandered and was marred by the ravages of guilt. The joyful spirit that had composed glorious psalms had become a spirit burdened by cheating, lying, and betrayal. David had seen God reject Saul as king and was grieved that he might be cast off as well, with no further purpose to his Lord. He knew that the Holy Spirit had once anointed and now sustained him. “Lord, please don’t throw me out!” he would have said. “Restore the joy in my salvation, that I might again serve you.”
God is into restoration. He takes scuffed-up, guilt-worn people like us and restores them with the oil of gladness through forgiveness in Christ. 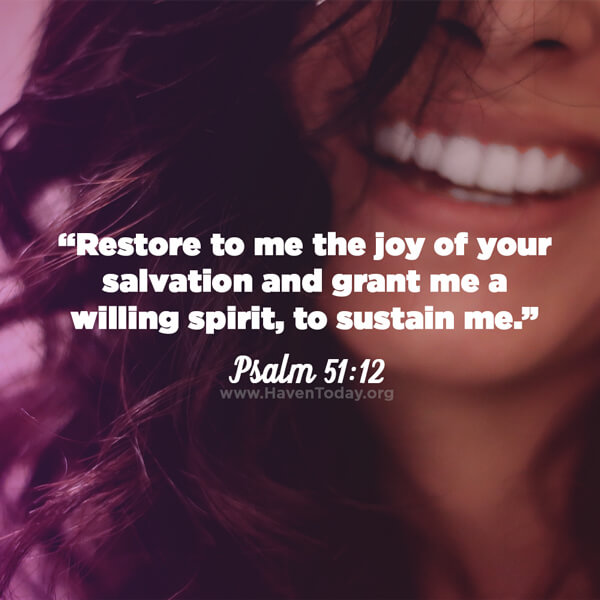 Has sin broken and marred you? Do you fear you’re useless to God? Ask Him to restore the joy of your salvation in Jesus!