“‘Come, let us rebuild the wall of Jerusalem, and we will no longer be in disgrace.’ I also told them about the gracious hand of my God on me and what the king had said to me.”

A friend of mine had a difficult relationship with her mother and asked me to pray with her about an upcoming extended visit with her. We spent the weeks before she came inspecting, praying, and talking about some of the broken places. We both began to see that though there were cracks, there also was much to build on. Our prayer and discussions gave my friend the courage and commitment she needed to say, “I want to start rebuilding.”
Before Nehemiah began the work of rebuilding the wall, he received guidance from God with passage, protection, and supplies from the king. But before approaching the builders and Jewish leaders, he alone inspected the wall to see what needed repairing. He confirmed what the Lord had put on his heart to do, and when the time was right, he invited others to begin the good work of rebuilding. Because Nehemiah had carefully and prayerfully waited for God’s timing, the hearts of the builders were ready. With proper attitudes they said eagerly, “Let us start rebuilding” (v. 18b). 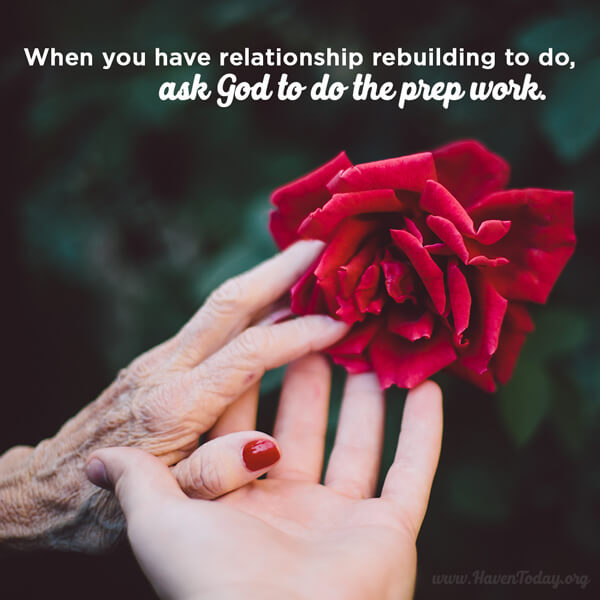 When you have relationship rebuilding to do, ask God to do the prep work. Inspect what needs repair, then trust in His leading and timing.