“But the father said to his servants, ‘Quick! Bring the best robe and put in on him…. Let’s have a feast…. For this son of mine was dead and is alive again; he was lost and is found.’”

A friend and I admitted that we often believe our sin has made us second-class Christians. We’ve worried that God loves us begrudgingly, that we’ve ruined our chance to serve Him, and that we’re shameful compared to other “better” Christians. The prodigal son felt this way, too. He’d failed, and he knew he didn’t deserve to be a son. His self-righteous older brother agreed.

But the young man’s father had the opposite response. He sprinted out to meet his returning son. There was nothing begrudging as he threw his arms around his son and kissed him. Contrary to his boy’s assertion that he should now be a servant, his father literally clothed him in sonship. Giving him the best robe, ring, and sandals, he restored his son’s rightful place in the family.

This message is not unique to this parable. God sought a restored relationship with sinful Adam and Eve. Jesus sought out Peter after his denial. And God will unreservedly love you and offer you new opportunities to serve Him. There’s no such thing as a second-class Christian. 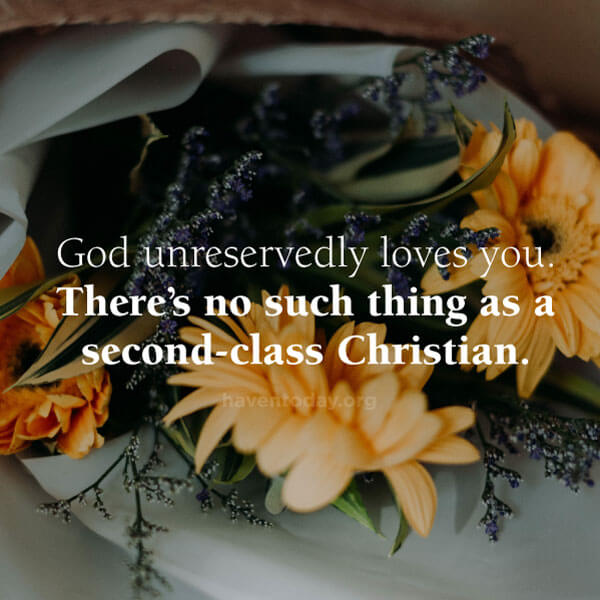 Father, help us to comprehend your great love for us and our rights as your fully forgiven sons and daughters. Amen