“Jesus came and stood among them and said, ‘Peace be with you!’ After he said this, he showed them his hands and side. The disciples were overjoyed when they saw the Lord.”

Ten of the disciples gathered together behind locked doors. For the past three years they had experienced the miracles and mystery of the kingdom of God, but this was different. And this time, Jesus was not there to explain what had happened. One of their friends, Judas, was dead by his own hands after betraying their Master. The remaining men had to be quaking in fear about what would happen to them now. How alone they must have felt.

Then Jesus showed up! He first spoke peace to them. Oh, how they needed that word of peace! By revealing His scars, He gave them visible assurance that He was real. And in the same breath, He commissioned and empowered them to be sent forth from the Father.

We don’t know why Thomas was missing from the gathering that day, but when he later heard the report from the other disciples, he just couldn’t believe it. He had to see for himself. Scripture and the testimony of others will bring the light of the gospel, but each person must personally embrace that truth himself as Thomas did. 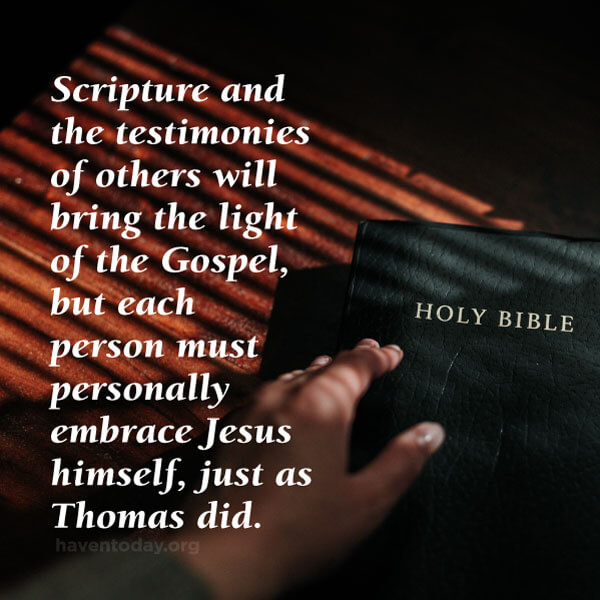 What an amazing thought that along with those scars on His hands, we find our names engraved there (see Isaiah 49:16).