“For the sake of his great name the Lord will not reject his people, because the Lord was pleased to make you his own.”

1 Samuel 12:22
Et tu, Brute? Benedict Arnold. Judas Iscariot. Do these make you think of traitors who were scorned in their own day and throughout history? We innately sense that betrayal is wrong and ought to be punished.
When Israel asked for a human king (1 Samuel 8), they rejected God (v. 7) and essentially became traitors, deserving punishment. Yet Samuel tells them, “Do not be afraid…You have done all this evil; yet do not turn away from the Lord, but serve [him] with all your heart” (12:20). God was pleased to make them His own, freely and graciously choosing them and putting His name on them at Mt. Sinai (Numbers 6:27). Also for the sake of His name—for His reputation—He would not reject them. Discipline them? Yes. But forsake them? Never.
When you came to faith in Christ, you were baptized into the name of the triune God. The Apostle John reminds us our sins are forgiven for His name’s sake (1 John 2:12). You and I have earned punishment, but we do not fear. The Lord absolutely will not reject us, for His name’s sake. 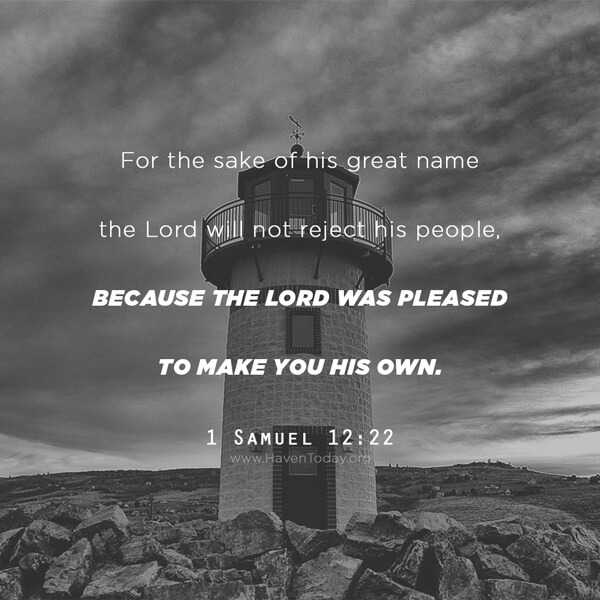 “oft our trust has Known betrayal,/ oft our hopes were vain,/ but there's one in every trial/ Constant will remain./ yesterday, today, forever,/ Jesus is the same.” (Richard Slater, 1854-1939)