“When Joseph woke up, he did what the angel of the Lord had commanded him and took Mary home as his wife.”

Matthew 1:24
The small amount of detail we have about Joseph speaks to his faithfulness and character. His life changed dramatically when God chose him as Jesus’ earthly father.

In His childhood Jesus was defined for the most part by His father, Joseph. Fully human yet also fully God, Jesus likely learned most of what He knew from Joseph. Later, the Scripture He quoted when tempted in the wilderness was probably first heard from the lips of His father. In His ministry, the care He showed the weak and vulnerable was probably first exhibited by the self-sacrifice of His earthly dad.

By the time Jesus was on the cross at Calvary, Joseph was no longer alive. Jesus took responsibility, even in His dying moments, to ensure that His mother was cared for, following the law (Deuteronomy 5:16), but also following His father’s example in tending to His loved ones.

Joseph was barely mentioned in Scripture and forgotten mostly in church history, but is remembered as a faithful servant. This can be our legacy too when we, like Joseph, say yes to God. 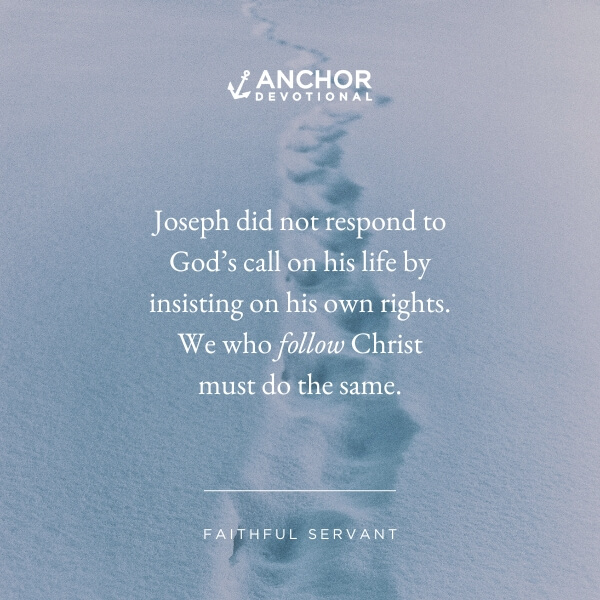 Joseph did not respond to God’s call on his life by insisting on his own rights. We who follow Christ must do the same.