“His disciples asked him, ‘Who sinned, this man or his parents, that he was born blind?’ ‘Neither, …’ said Jesus, ‘but this happened so that the work of God might be displayed in his life.’”

John 9:2-3
A hard day in parenting a child with disabilities is the day the child realizes he is different from other kids. For us, this began a repeating drama which centered on our son tearfully asking us why God made him this way.

In today’s reading we see that Jewish culture did affirm that the blind man was made in the image of God. But it also believed his disability was a curse from God for sin, either that of his parents or of his own.

Some Christians around the world still hold this perception today. But Jesus’ response gives us an answer that is short in length and rich in meaning. We learn that God views disability as neither a curse nor as an accident. While it is the result of the brokenness found in all of creation, it is under God’s control and is part of His sovereign plan. The man was born blind so that Jesus would be made famous through him.

Are you asking why God made you as He did? It is not at all an impediment to knowing Him or glorifying Him. He made you to exalt Him, which you do when you accept His love. 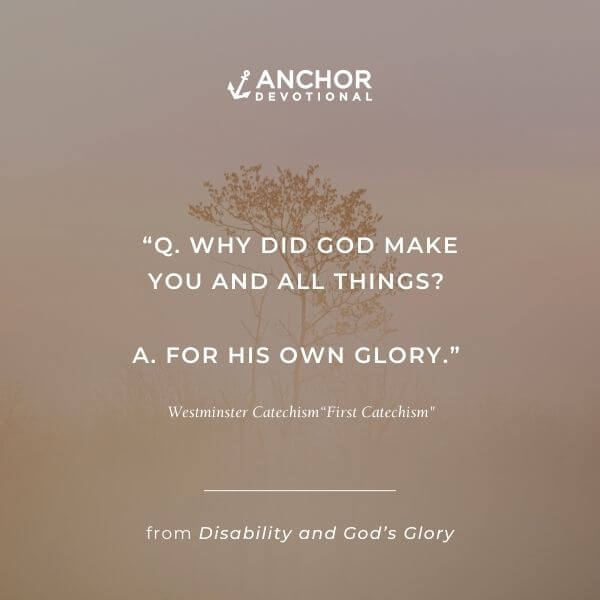 “Q. Why did God make you and all things? A.For his own glory.” (Westminster Catechism“First Catechism,” 1996)