“Everyone must submit himself to the governing authorities, for there is no authority except that which God has established. The authorities that exist have been established by God.”

When Paul wrote this letter in A.D. 57, Nero had been ruling Rome for three years. The church had been under persecution in Rome for more than a decade. Then Paul writes that everyone is to be subject to the governing authorities, realizing God’s sovereignty. Yes, God instituted even Nero’s reign in Rome.
Submission to the governing authorities needs to be connected with the previous Romans passage in which we are admonished, “If it is possible, as far as it depends on you, live at peace with everyone” (12:18). So being subject to governing authorities means paying taxes, giving appropriate respect and honor. Part of living as Christians in an increasingly anti-Christian world means obeying authority, even if the authorities are pagans. It has become fairly rare that a leader does know the Lord.
Christians living in a pagan world are to love as Christ loved the world and gave Himself for it. The example we give and the sacrifices we make may be the very things that the Lord uses to bring a lost soul to Him! 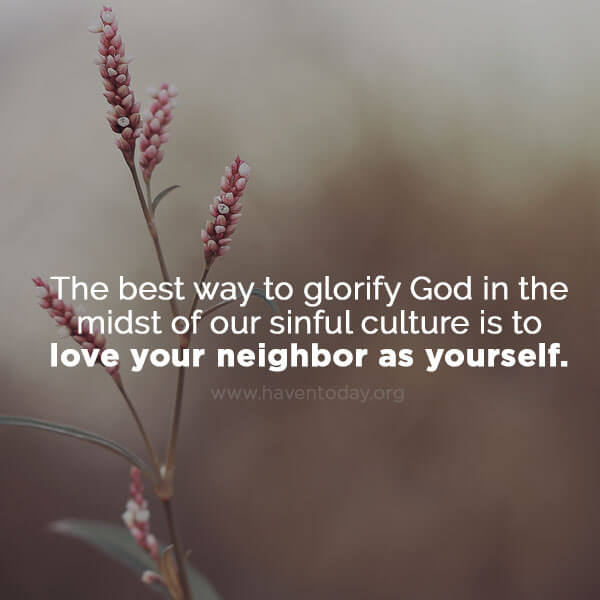 The best way to glorify God in the midst of our sinful culture is to love your neighbor as yourself.