“I am among you as one who serves. You are those who have stood by me in my trials. And I confer on you a kingdom… so that you may eat and drink at my table in my kingdom.” Luke 22:27b-30

David spoke in Psalm 23 of a table prepared for us by the Good Shepherd. Long after that, the Lord Jesus sat at a prepared table with His friends in an upper room just before His crucifixion.
Go to that upper room in your imagination. It was evening. Already persecution and death were closing in on the Savior. He wanted fellowship with those whose faith He had inspired. When the supper ended, He rose from His place, laid aside His outer garment, and began to wash the disciples’ feet. We can hardly grasp all that would have been going through the disciples’ minds: Jesus’ talk of leaving them and of one who would betray Him, the fear growing in their hearts, and now the strange behavior of their Lord doing a servant’s job. Soon they would understand more fully what it all meant.
You and I do see now that the table of the Lord is filled with blessing for us. He gave His body so we might know Him as the true Bread of Life. He gave every drop of His blood so that we might sip the wine of joy that comes from belonging to Him. 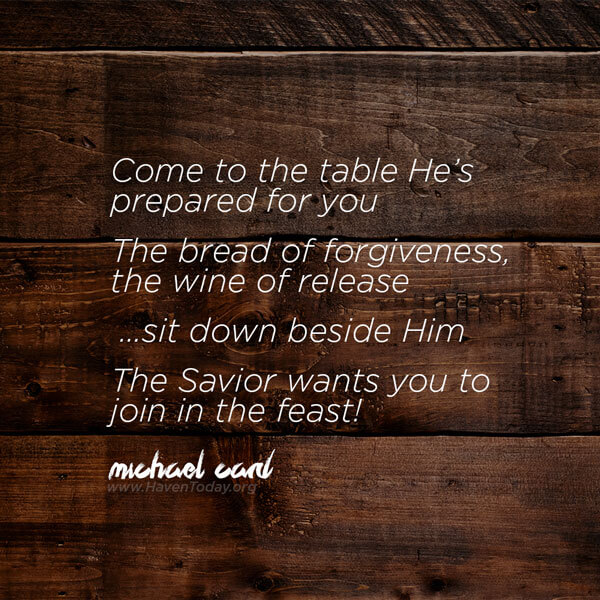 “Come to the table He’s prepared for you/ The bread of forgiveness, the wine of release/ …sit down beside Him/ The Savior wants you to join in the feast!” (Michael Card, 1988)