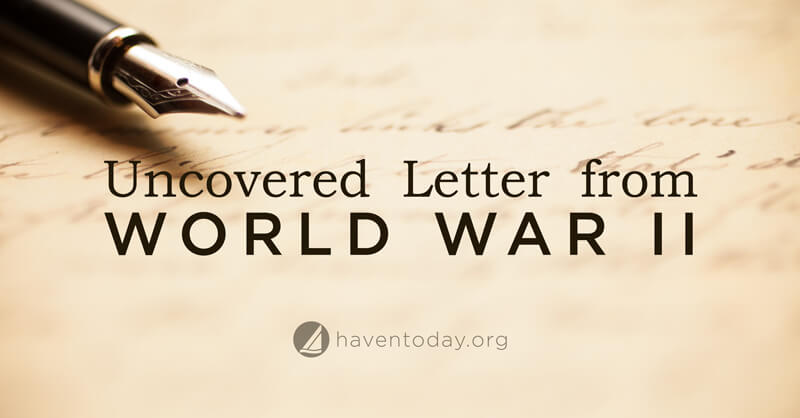 Haven Ministries is part of an 81-year legacy that began under the leadership of radio host Paul Myers. Known as First Mate Bob on the air, he encouraged listeners for decades on the radio program called Haven of Rest (now called HAVEN Today). Learn more about our history.

Recently, we thought it would be fascinating to dig up an old “Log of the Good Ship Grace,” an update First Mate Bob wrote regularly, about what Christians can look forward to when World War II would finally be over. And we weren’t disappointed.

This is a word-for-word transcription of what First Mate Bob wrote in 1944, just one year before the end of World War II. He was writing to a war-torn nation, but I think you’ll find that the words he wrote 71 years ago continue to be true for each of us today.

When will that be? Looking back across the sum total of human history we can find comparatively few years when there has been peace. Yet today our radio broadcasts, our newspapers and magazines are full of plans both social and economic, designed to create what man has never been able to bring about, namely: a post-war Utopia, devoid of armed conflict, and providing perfect living conditions for all peoples.

One school of post-war thought lays emphasis upon the economic problem of tomorrow. Its exponents declare that our main efforts should be directed toward worldwide stabilization of currency. They talk glibly of “reconversion to consumer-goods production,” and “resumption of world trade on a far more gigantic scale.” Will a planned readjustment to “economic stability” solve the problems of such a world as this, or is our need deeper than that? We now have more than forty million people in war industries. Many of these have had their standards of money and living distorted all out of proportion. There will be a “bottle-neck” when peace comes which will make a wartime traffic jam mild by comparison. How about rebuilding “small business” which has been wrecked by the war?

Another school of thought sees the “social problem” as being the greatest task which will confront us in the post-war era. We are told on every hand that we must first rebuild bombed cities and homes, clothe and feed starving millions of devastated nations. After this, a world-wide police force must be set up to prevent war-minded nations from arming themselves and slaughtering their neighbors. But how about rebuilding American home life? What sort of social planning must we have to recreate the form of family life upon which this nation was founded? How about the “factory orphans” and the juvenile delinquency which has resulted in the most perplexing problem our law enforcement agencies have ever known?

Certainly, the economic and social problems are many and staggering. Millions of people have been pulled up by their roots, physically and mentally, perhaps never to be re-established. Mere social and economic planning alone will not suffice in the bewildered world of tomorrow, for we are face-to-face with sinister forces at work throughout the world today, which defy the cunning of mere man. History’s greatest disasters, hatred and wars have marked our generation. One by one, nations have fallen and disappeared, having been snuffed out like lights.

The old order of things is disappearing and a new one is taking its place. What this will turn out to be, no one knows. Everywhere one hears the expressed opinion that this war is caused by the clash of ideologies and theories of government, such as Fascism, Nazism and Communism. These are not first causes, but are, rather, the results and the produced effects of spiritual wickedness.

The main problem of today is a spiritual one. Something is going on in the world at this moment of history which the post-war planners have failed to take into consideration. There is an invisible, evil power with secret agents everywhere. It has been organized into “principalities” and “powers,” and these agencies are more powerful than the combined forces of men. The best minds of humanity are helpless against these rulers of the darkness of this world.

Satan, “the prince of this world,” has blinded the minds of men, and has organized their campaigns of hatred against God and His people and every preacher, minister and evangelist. We in radio Gospel broadcast have but recently felt the furious attack of this spiritual fifth column. No human power can successfully plan and execute a program to prevent the ravages of these devastating forces of destruction. No social or political philosophy can stem the rising tide of evil. This old world is rushing toward Armageddon, driven by unseen agencies. All of the plans and schemes of earth’s brilliant intellects which reckon without God and His supernatural power to help, are but feeble futile efforts.

All about us today are the unmistakable signs of the imminent return of our Lord Jesus Christ to this world. Surely before long, the kingdoms of this earth will become the Kingdom of our God and His Son, Christ. Remember the words of Jesus to His embattled church, “Fear not, little flock; for it is your Father’s good pleasure to give you the kingdom.” (Luke 12:32) This promise is soon to be fulfilled. “And the kingdom and dominion, and the greatness of the kingdom under the whole heaven, shall be given to the people of the saints of the Most High, Whose kingdom is an everlasting kingdom, and all dominions shall serve and obey Him.” (Dan. 7:27)

How about your own personal “post-war planning?” Are you prepared to live in the kingdom that is to come? Have you made intelligent and adequate preparation? Your citizenship in God’s “new-world order” will depend upon what you do with His Son, Christ Jesus, here and now. If you do not crown Him King of your life now, you will never take your place among those who are to rule and reign with Him. Mercy’s gates are still open, but soon they will close. Today, open your heart to Him.