23 Fascinating Quotes on God and Politics 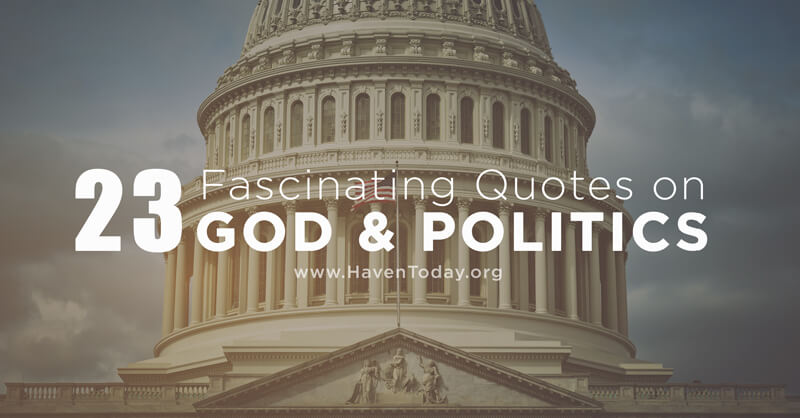 “America is a nation of believers, dreamers and strivers that is being led by a group of censors, critics and cynics.” — Donald Trump, Republican Presidential Nominee

“My study of the Bible, my many conversations with people of faith, has led me to believe the most important commandment is to love the Lord with all your might and to love your neighbor as yourself.” — Hillary Clinton, Democratic Presidential Nominee

“One’s task is not to turn the world upside down, but to do what is necessary at the given place and with a due consideration of reality.” —  Dietrich Bonhoeffer
Once, on being asked by the Pharisees when the kingdom of God would come, Jesus replied, “The coming of the kingdom of God is not something that can be observed, nor will people say, ‘Here it is,’ or ‘There it is,’ because the kingdom of God is in your midst.” — Luke 17:20-21
“I will not support any bill that diminished the religious freedom of Hoosiers or that interferes with the constitutional rights of our citizens to live out their beliefs in worship, service or work. … No one should ever fear persecution because of their deeply held religious beliefs.” — Mike Pence, Republican VP Nominee

“What are kingdoms without justice? They’re just gangs of bandits.” — Augustine
“Politics and religion are both about … breaking out of our own selfishness and our own limitations and saying what is and isn’t necessary. We can be better than that.” — Tim Kaine, Democratic VP Nominee
“Then Jesus said to them, ‘Give back to Caesar what is Caesar’s and to God what is God’s.’ And they were amazed at him.” — Mark 12:17
“I like to be good. I don’t like to have to ask for forgiveness. And I am good. I don’t do a lot of things that are bad. I try to do nothing that is bad.” — Donald Trump
“There is so much more in the Bible about taking care of the poor, visiting the prisoners, taking in the stranger, creating opportunities for others to be lifted up, to find faith themselves that I think there are many different ways of exercising your faith.” — Hillary Clinton
“Regardless of where the kingdom of man may be headed – the Kingdom of God is always headed in the right direction. It’s always moving forward in triumph. God has given Jesus all authority and he’s using it to claim people from every nation on earth and to bring them into his kingdom.” — Charles Morris
“… your kingdom come, your will be done, on earth as it is in heaven.” — Matthew 6:10
“But seek first his kingdom and his righteousness, and all these things will be given to you as well.” — Matthew 6:33
“The ultimate test of a moral society is the kind of world that it leaves to its children.” — Dietrich Bonhoeffer
Let everyone be subject to the governing authorities, for there is no authority except that which God has established. The authorities that exist have been established by God. Consequently, whoever rebels against the authority is rebelling against what God has instituted, and those who do so will bring judgment on themselves. For rulers hold no terror for those who do right, but for those who do wrong. Do you want to be free from fear of the one in authority? Then do what is right and you will be commended. For the one in authority is God’s servant for your good. But if you do wrong, be afraid, for rulers do not bear the sword for no reason. They are God’s servants, agents of wrath to bring punishment on the wrongdoer. Therefore, it is necessary to submit to the authorities, not only because of possible punishment but also as a matter of conscience. This is also why you pay taxes, for the authorities are God’s servants, who give their full time to governing. Give to everyone what you owe them: If you owe taxes, pay taxes; if revenue, then revenue; if respect, then respect; if honor, then honor.” — Romans 13:1-7
“Christians should be as involved in politics and government as they are in all other realms of life.” — Tim Keller
“Politics are not the task of a Christian.” — Dietrich Bonhoeffer
“The earthly city glories in itself, the Heavenly City glories in the Lord.” — Augustine
“But our citizenship is in heaven. And we eagerly await a Savior from there, the Lord Jesus Christ,” — Philippians 3:20
“I will be the greatest representative of the Christians they’ve had in a long time.” — Donald Trump
“I have been very disappointed and sorry that Christianity, which has such great love at its core, is sometimes used to condemn so quickly and judge so harshly.” — Hillary Clinton
“If your candidate wins in November, keep in perspective Jesus’ reign was there all along. If your candidate loses, remember, heaven hasn’t lost its grip on us.” — Charles Morris
“There is not a square inch in the whole domain of our human existence over which Christ, who is Sovereign over all, does not cry, Mine!” — Abraham Kuyper