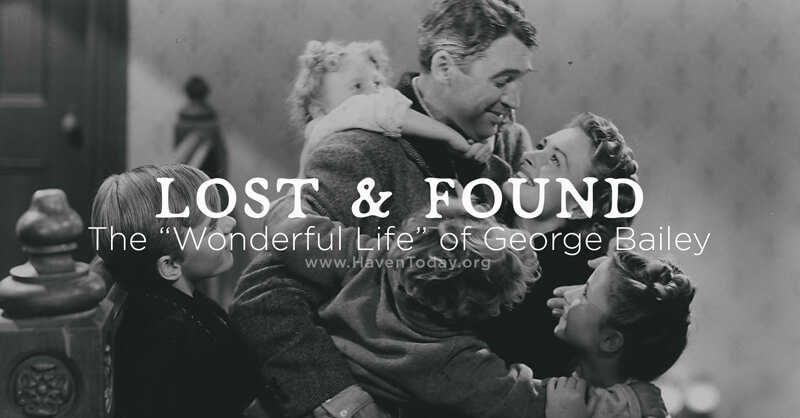 Have you watched it yet? It’s 70 years old this month and is perhaps the most popular Christmas movie around. It’s a Wonderful Life is a sweeping tale that follows the life of George Bailey, a humble family man who falls on hard times and is charmingly played by Jimmy Stewart.

For many, the attraction to the film is nostalgia. Set in a small town in the mid-1940’s, it appears at first glance to be a simple story about a quiet era now gone by. But I believe most of us enjoy the film because of the way it celebrates the importance of family and community. As I watched it again this year with my wife, another theme resonated in my heart—this is a film about lost people being found.

In short, near the end of the movie, George Bailey’s business is failing and he sees no way out. If he doesn’t come up with several thousand dollars quickly, he will lose everything and possibly go to jail. Upon learning this news, he considers killing himself. But then at his lowest point, he utters a simple prayer:

“Dear Father in Heaven, I’m not a praying man. But if you’re up there and you can hear me, show me the way. I’m at the end of my rope. Show me the way, God.”

After George’s heartfelt prayer, God answers it in a most unique way. He sends an angel named Clarence to show him a world where George never existed. George quickly sees how precious his life is and that it truly does matter.

Now don’t get me wrong, this is a Hollywood film that is lacking in the theological department (Do angels really get their wings when a bell rings?). Sadly, the film never mentions the true Savior of the world: Jesus Christ. Yet it does teach a simple truth—everyone is lost and unable to save him or herself.

Perhaps that’s why I teared up at the end of the movie. George Bailey finally realizes that his life is a gift from God and has value. Upon returning to his family, his home is flooded with friends and family who have gathered to bail him out financially. As this “Christmas miracle” unfolds, they all sing Hark! The Herald Angels Sing. And that’s when the movie’s theme struck a cord with my heart. There’s a line in that old hymn that says, “God and sinners reconciled”—that’s what it’s all about.

It’s exactly what Jesus came to do. He is the Savior the angels long ago proclaimed would come to rescue sinners. (Luke 2:11) What’s even more profound is that He not only rescues people from their sins, He also reconciles them with God. To put it in His own words, “The Son of Man came to seek and to save the lost.” (Luke 19:10)

The reality of being lost is mostly ignored in our modern world. But if we’re honest with ourselves, we all feel this separation. We sense that something is not right.

This theme is told over and over in the Scriptures. The prophet Isaiah explained that all humans are “like sheep” and “have gone astray. We have turned—every one—to his own way.” (Isaiah 53:6)

This is the core of our “lostness.” We were created to know God and enjoy Him forever, yet we all choose to follow our own way and please ourselves. (Isaiah 53 & Romans 3)

Our sinful ways have now turned a once “good world” into a “broken world” where bad things happen. (Genesis 1-3) We’re lost and no matter how hard we try, we have NEVER been able to save ourselves. (Romans 8:8)

So when those angels appeared to the shepherds, I think we can now better understand why they were rejoicing—it was truly good news of great joy for humanity! (Luke 2)

The angels were not just celebrating the birth of Jesus, they were celebrating His entire mission. They knew that He was born to die. They knew His mission involved His death and His resurrection. And through the action of a perfect sacrifice, Jesus would conquer both death and sin for His people. (John 11:25-26 & Romans 10:9)

So with all of this in mind, how are we saved from our “lostness” and sin? Simply by believing that Jesus is the Savior provided by God the Father to take our punishment and to give us His perfect record. I like how Peter explained it, “For Christ also suffered once for sins, the righteous for the unrighteous, that he might bring us to God.” (1 Peter 3:18) We simple come to the end of ourselves and turn to Jesus. That’s what the Bible calls repentance. We give him our sin and he gives us forgiveness and His perfect record. (1 John 1:9) In doing so, we believe by faith that Jesus has provided everything we need to be saved and to live a grace-filled life that brings God glory. (Ephesians 2:8-10)

I guess that’s why I was so touched this year as I re-watched It’s A Wonderful Life. George Bailey had come to the end of himself. He had no hope. But before he ended his life, he turned to God for mercy. It may not be doctrinally sound, but the film’s message of seeing our lost state and turning to the Lord is very clear.

Do you see your need to be saved? Do you find yourself understanding that there is no other person on earth who can save you from your sins? Then turn to Jesus this Christmas season, confess your sin, and proclaim Him as your Lord and Savior! Then you can sing with the angels this year knowing that you have been reconciled to God through the Savior, Jesus Christ.
And that is truly good news that brings great joy!

Troy Lamberth is the executive producer of HAVEN Today. On the side, he teaches film at Providence Christian College, produces documentaries, and often teaches at his church. He enjoys discovering how Jesus is involved in all aspects of our lives—from faith to film to family—and how our relationship with him shapes the way we live. He and his wife Melissa have three young children.