C.S. Lewis: In His Own Words 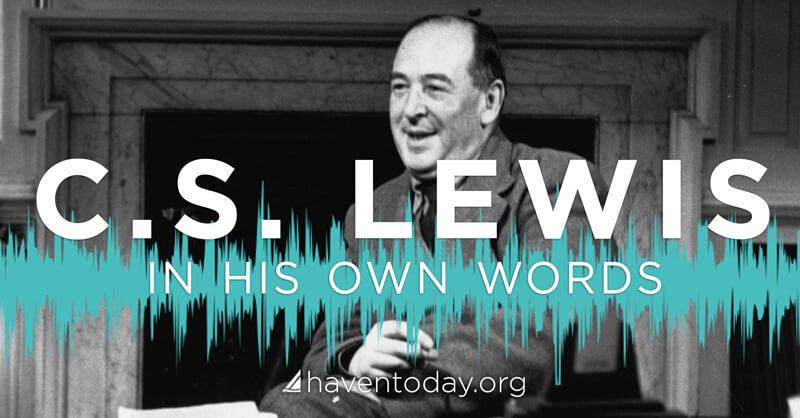 You could say it was The Chronicles of Narnia, C.S. Lewis’s stories of four children who fall through a wardrobe into a magical land of talking animals, that led me to saving faith.
Because if it weren’t for those books and their captivating stories, I would have never been attracted to Lewis’s Mere Christianity. I saw the book on my best friend’s floor and picked it up because I had loved the Chronicles and had no idea Lewis had written more. I believe that God had already taken a hold of my heart. But it was while reading Mere Christianity that the logic of it all fell into place.
Mere Christianity has affected many other lives besides my own. The back story to the book is that it was made up of the words Lewis spoke in a series of radio talks that he did for the BBC during World War II. Only later would he compile his notes to form the book.
To hear Lewis in his own words, check out the video we found of the lone-surviving audio of one of these talks:

Whether it’s through a good story or the way that one great story leads to another, is it any surprise that a Lewis’ writing could lead someone to believe in Jesus Christ?

Yet God is the writer of true-story page-turners, including the bestselling book of all time with the most unexpected twist. In the end, God Himself, the author, takes man’s place as violator of God’s law. Man receives eternal life instead of eternal punishment—but only if he believes that the story of Jesus is fact and not fiction.
This is the same story that C.S. Lewis spoke about on the radio during World War II. In fact, you should check out C.S. Lewis At War, an audio drama that goes behind the scenes of the radio talks that would later become the special book that helped led me to the Lord: Mere Christianity.

Lindsey M. Roberts spent years writing exclusively for secular journalism, including such outlets as The Washington Post, Architect, and Gray magazine, before she first tried to write about Jesus. She’s thrilled to explore in words how everything from cleaning the kitchen three times a day to delighting in the maritime history of Nantucket is an opportunity to meet and glorify God. Lindsey lives with her husband, a pastor and U.S. Army Reserve chaplain, and two children in Virginia.