The people walking in darkness have seen a great light; on those living in the land of the shadow of death a light has dawned.

When a young boy became fearful as the lights were turned off at night, his parents gave him a small flashlight. If he woke up alone in his room, he could shine it around to see everything was fine. With the small flashlight gripped in his hand, darkness no longer troubled him. A feeling of peace settled on him.
From time before the foundation of the world, God knew He would send His Son into a sin- stained, darkened world. As soon as Adam and Eve sinned in Eden, God promised a Messiah who would undo all that went wrong. Throughout history He promised that people walking in darkness would see a great light.
All of God’s promises became reality one holy night with the birth of a baby. That first Christmas in Bethlehem, God illuminated the world, giving peace to His followers. As we celebrate Advent, we recognize that through Jesus, God is with us. He has not forgotten us! The true Light, Jesus, is the only hope for peace in our world of darkness and fear. His light and peace cause the darkness to scatter. 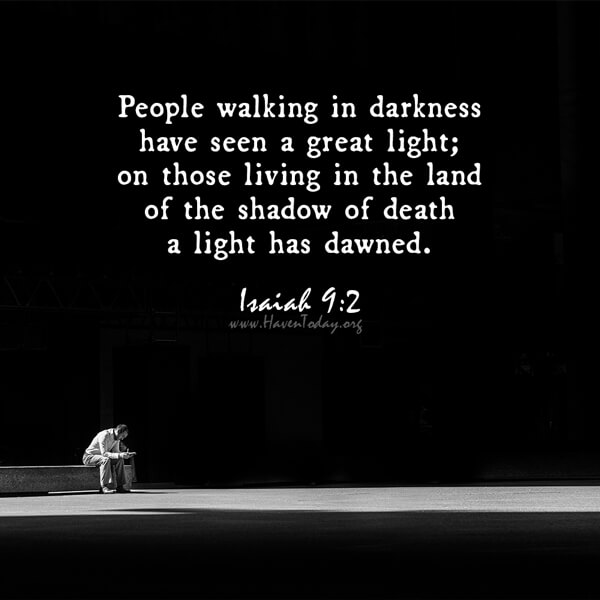 “Yet in thy dark streets shineth the everlasting light;/ the hopes and fears of all the years are met in thee tonight.” (Phillips Brooks, 1867)