Mount Sinai was covered with smoke, because the Lord descended on it in fire. The smoke billowed up from it like smoke from a furnace, and the whole mountain trembled violently.

Far from displaying just entertaining theatrics, the Lord descends upon the earth in visible power. At the time of the Exodus, the Israelites were warned that if they so much as touched Mount Sinai, they would die. From the priests to the animals in their midst, any living thing that touched the foot of the mountain would meet with certain death. The Lord God is a holy God. Anytime a man forgot his place and breached the divide between holy and common, it never ended well for him (see 2 Samuel 6:7).
Israel trembled in fear when they saw the Lord descend. They felt that reverential awe caused by a right understanding of God. Godly fear is a knowledge of unworthiness, a fear which puts man in his place. “The fear of the Lord is the beginning of knowledge” (Proverbs 1:7).
As you come to the Lord in prayer, be in awe of who and what He is. Let the very first words to Him voice your adoration for His magnificence. Stand in awe of who God is: your consuming fire, the One who conquered the flames of eternal death for you. 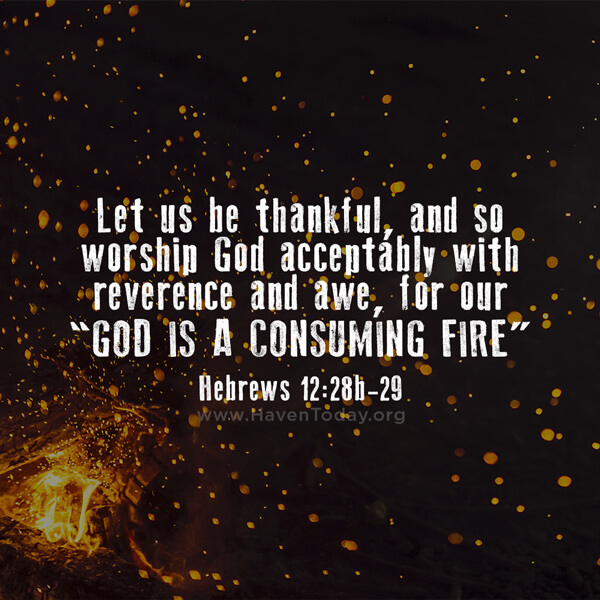 "Let us be thankful, and so worship God acceptably with reverence and awe, for our ‘God is a consuming fire.’” (Hebrews 12:28b-29)