7 Times Jesus Shows Up in Narnia 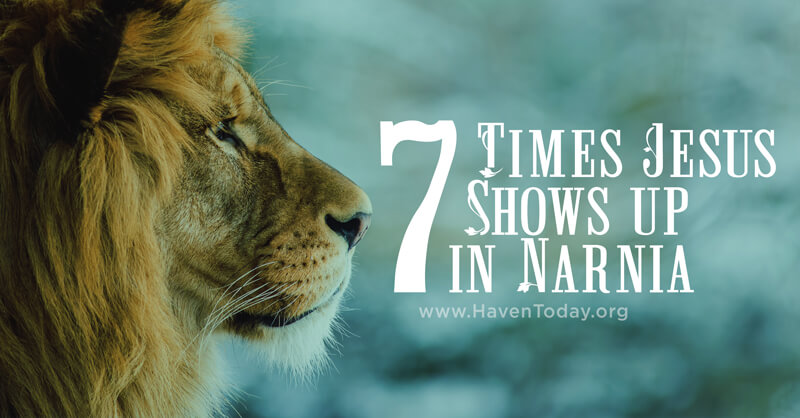 Few stories have inspired the imagination of children and adults quite like C.S. Lewis’ tales of fantasy, adventure, and fairy tale creatures. The Chronicles of Narnia have not only become timeless treasures, but these seven books also contribute to how children and families come to know Jesus.

{If you want to experience the series again or for the first time, check out the audio drama of all seven books!}

I’m not the first to point it out, and I won’t be the last. Many readers already know The Chronicles of Narnia is wrought with Christian symbolism and metaphors—but some of the richest moments of Christ showing up may go overlooked.

One of Lewis’ young fans in America wrote to him asking how he came up with the name for Aslan. Lewis wrote back and said:

Dear Carol … It is a pleasure to answer your question. I found the name in the note to Lane’s Arabian Nights: it is Turkish for Lion. And of course I meant the Lion of Judah.

So grab your Bible, and maybe a cup of hot chocolate, because we’re about to journey through Narnia to find Jesus in all seven books:

In the beginning, Narnia was dark, formless, and void. Then Aslan came and created all the animals, the stars, the trees, and everything that lives by singing and roaring. Or, at least that’s the account we receive in the first chronological book of Lewis’ series The Magician’s Nephew.

Much like God created the earth and everything in it, Aslan creates a perfect world. However, just like the story of Adam and Eve, sin entered Narnia, which would then corrupt the land and creatures till the end of time.

Generation after generation would believe in Aslan and then reject his very existence. This painful cycle is reminiscent of how the Israelites, God’s chosen people, would turn away from the Lord, only to be mercifully delivered over and over again.

Edmond may be he nastiest little boy you’ve ever encountered. Pair that with the enchantment of Narnia’s sinister Queen, known as the White Witch, and you see a boy in desperate need of redemption. But who will give it to him?

In The Lion, the Witch, and the Wardrobe, Lewis sets the stage for Narnia’s creator to re-enter the land and restore the kingdom from evil and darkness. But in order to do that, he must lay his life down for another—for a boy who doesn’t deserve it—only to be resurrected and help the forces of good overcome evil.

Sound familiar? This may be the richest Christ-metaphor in the entire series. And it’s certainly a powerful way to show children and adults alike how Jesus redeems sinners through his sacrifice and resurrection on the cross.

Long after Peter, Susan, Edmond, and Lucy ended their royal reign and returned to their own world, Narnia relapses into a state rebellion. Men from a distant land have come and driven the talking creatures out of their homes and into exile.

In the meantime, history is being re-written to quench out all knowledge of the way Narnia used to be—the way it was intended to be. Even the Narnians lose faith in Aslan and can’t see him when he arrives, that is not until they finally put their faith in him.

In Prince Caspian, the four children return to Narnia to help the prince fight off these evil men and restore the land to its proper state. But they can’t do it alone. Aslan, like Christ, does not leave his people alone to fight against terrible odds. Indeed, without our true Savior, victory is not possible.

The Horse and His Boy is the odd-ball of the seven books, but it may speak the most into the hidden nature of God and how He relates to humanity. Without the characters of the story even knowing it, Aslan is directing their paths. The two humans and two talking horses not only reach their journey’s end, but they are also unwittingly directed to help others fend off evil along the way.

Shasta, a young boy in the story, finally meets the Lion and asks, “Who are you?” Aslan answers in a way reminiscent of God’s declarations of “I AM”:

“Myself,” said the voice, very deep and low so that the earth shook; and again, “Myself,” loud and clear and gay; and then the third time, “Myself,” whispered so softly you could hardly hear it, and yet it seemed to come from all round you as that the leaves rustled with it. Shasta was no longer afraid that the voice belonged to something that would eat him, but a new and different sort of trembling came over him. Yet he felt glad too. After one glance at the Lion’s face he slipped out of the saddle and fell at its feet, and the High King above all kings stooped towards him and touched his forehead with its tongue.”

Aslan later reveals to the characters that he was with them on multiple occasions and led them in the right direction, which is much like how the Lord works in our own lives. Though we may not be able to pinpoint the first time Christ began to work in our hearts, he continues to call us to himself in unique, and sometimes hidden, ways.

“There was a boy called Eustace Clarence Scrubb, and he almost deserved it.”

So starts The Voyage of the Dawn Treader. Eustace is a whiner, a know-it-all, and a self-centered little boy who makes life miserable for everybody, including himself. Lewis says that when you start thinking dragon thoughts and acting like a dragon, then eventually you become one—and that’s what happened to Eustace. He literally becomes a dragon.

Wanting to change, Eustace tries to claw off his dragon skin but he can’t do it—no matter how hard he tries. And it’s the same for us—we can’t change ourselves, we can’t fix our lives. But there’s someone who can. And just as Aslan shreds the dragon scales off of Eustace, we need Christ to remove our sin and allow us to enter new life in him.

Later in the story, Lucy asks Aslan when they can come back to Narnia again and he tells her, very gently, that she must return to her own world and never come back to Narnia. Lucy sobs, “It isn’t Narnia, you know … it’s you. We shan’t meet you there. And how can we live, never meeting you?” Aslan tells her, “But you shall meet me, dear one … but there I have another name. You must learn to know me by that name. This was the very reason why you were brought to Narnia, that by knowing me here for a little, you may know me better there.”

Can you guess what that other name might be?

6. Battling the Powers of Darkness

The Silver Chair is a powerful story that reflects the ensnaring power of evil. Jill Pole comes to Narnia with Eustace, and they are tasked to find King Caspian’s son, who went missing looking for the serpent who killed his mother.

As Jill and Eustace are rescuing the King’s son, they must also defeat “the Lady of the Green Kirtle,” who has a striking resemblance to the White Witch in The Lion, the Witch, and the Wardrobe. She tries to destroy the children’s belief in the real Narnia and trap them, too, but it is their faith in Aslan that plays the crucial role in defeating the enchantress.

Much like how sin can ensnare us in this world, we should never underestimate the powers of darkness. Evil can take hold of us at any point, but thankfully there is someone more powerful than anything within this world that might try to harm us.

7. The Antichrist and Final Judgment

The Last Battle is the final story in the timeline of The Chronicles of Narnia. By now, many have lost faith in Aslan and we come face-to-face with the end times as it is written by Lewis in Narnia.

An evil ape disguises a reluctant donkey to pose as Aslan. Jill and Eustace return to Narnia to try helping the loyal Narnians return order and faith in the real Aslan. Though, as the end draws near, they end up being forced through a stable door that serves as the entryway to paradise (Aslan’s Country). All the while, Narnia is completely and utterly destroyed.

Of all the events, battles, and tragedies that happen in The Last Battle, it all culminates at the final judgment of the creatures. Like we see in Scripture, the point isn’t to get caught up in the signs and battles. Instead, we are to look for Christ’s coming and yearn for the new Heavens and new Earth. And when this future Kingdom is ushered in, it is only then that we will finally enter a land that is exactly as God intended it. A land that is not broken, fallen, or sinful.

Best of all, in that time we will be with Jesus, the real Lion of Judah, the One who Aslan is just a mere reflection of. And we’ll be with him forever.

Whether you are a child, parent, or lover of good stories, I suggest giving The Chronicles of Narnia another look or listen. In the above list, I’ve only highlighted a few of the major Christ moments in these books. When you actually take the time to meet Aslan and the other characters Lewis created, you begin to pick up on the finer truths woven throughout each story.

So what are you waiting for? Pick up a copy of the series, or do what I did—check out the Focus on the Family Radio Theatre production of The Chronicles of Narnia. Beautifully packaged and professionally produced, you’ll find yourself wandering through the woods of Narnia in no time as you listen to this amazing audio drama.